In this article will look at  swot analysis.The company I am going to analyze is Amazon.com, Inc. Amazon is an American multinational technology enterprise based in Seattle. It mainly focuses on e-commerce, cloud computing, digital streaming, and artificial intelligence.

People have commonly known it through its online shopping website. Its online shopping platform can be described as the world’s largest e-commerce platform. Its cloud computing service has been using by many people across every country.

What kind of market or industry does Amazon involve in? Based on the company’s focus, Amazon’s market is mainly the e-commerce market and with few self-manufactured and retail brands. What is Amazon’s target market? Amazon has a variety of different markets depending on the different types of service.

It depends on what kind of product they need because Amazon has a variety of different artificial intelligence products. What are Amazon’s competitors? Its competitors are eBay, AliExpress, wish, Taobao, craigslist, etc. 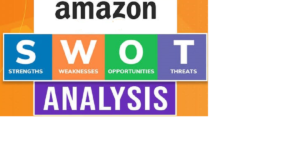 Strong brand name support: As a global e-commerce giant, Amazon has a strong position and successful brand image in the market.
· Brand valuation
Support: According to Interbrand’s Global Brand Ranking 2019, Amazon is ranked at #3 position (after Apple at #1 and Google at #2), with a brand value of $125 Billion.

Support: Amazon caters to a large number of customers for everyday needs at inexpensive prices. This has made it a customer-oriented brand.

The company has formed numerous strategic alliances with many companies like Evi Technologies, Thalmic Labs, Shoefitr, The Orange Chef, etc. It has a strong value chain system which also helps in maintaining a low-cost structure.

Support: According to Business Strategy Hub, Amazon owns an extensive product mix that attracts online customers to make their majority of purchases from it rather than other online retailers. As of 2018. Amazon has sold 562.3 million products in its Amazon.com Marketplace.

–  A large number of third-party sellers

Support: Due to the high traffic volume on Amazon’s sites, a large number of third-party sellers have joined the platform of Amazon to sell their merchandise. The data from Fulfillment by Amazon (FBA) reveals that there are more than 2 billion items available from third-party sellers.

Support: According to Business Strategy Hub, this strategy has benefited Amazon the most. Amazon develops partnerships with local supply chain companies that help it in competing against domestic e-commerce rivals. It understands the local needs and launches its services as per the country’s culture.

· A large number of acquisitions

Support: The successful acquisitions of Whole Foods, Zappos.com, woot.com, Junglee.com, IMBD.com, and many others have produced significant revenues and profits for Amazon.

· An easily imitable business model
Support: Online retail businesses have become quite common in this digital world. So imitating Amazon’s business model for rival firms is not so difficult.

A few businesses are even giving Amazon a tough time. These include Barnes & Noble, eBay, Netflix, Hulu, and Oyster, etc.

Support: In a few areas such as India, Amazon has faced losses. It’s free shipping to customers can be one of the reasons that expose the risks of losing margins in some markets.

Support: According to The Street, Amazon has had to try to make other products other than AWS and Amazon.com. However, many have ended up as a failure. Such as the Amazon Fire Phone, it started on sale in July 2014. But Amazon soon removed the phone from its shelf in September 2015 because of the big loss of profit.

Support: According to Business Strategy Hub, Tax avoidance in Japan, UK, and the US have sparked negative publicity for Amazon. President Trump has recently criticized Amazon over taxes on social media networks.

Support: Amazon owns very limited physical stores. This sometimes hinders to attract customers to buy things that are not sellable in online stores.

Support: Amazon took a big part of the e-commerce market in America. But Amazon didn’t take a big part in the world. there are many e-commerce companies like Alibaba, eBay, wish and others to compete with Amazon. There is a market that Amazon is hard to squeeze in such as China, Europe, India.

Support: although a lot of products that sell on Amazon are regulated and high-quality products. But, since Amazon allows all third-party seller to sell their products on Amazon, Amazon can’t determine whether the product is genuine or counterfeit.

· Seasonality of the business

Support: Amazon has a high seasonality business revenue. According to Amazon.com Inc’s annual report, the company generated 32%, 34%, and 31% of our annual revenue during the fourth quarter of 2016, 2017, and 2018, respectively.

Support: there are many sites online that talk about future trends of e-commerce. According to Beeketing, one trend is global eCommerce retail sales will hit 4.9 trillion in 2021. This is a 256% growth rate from 2014 to 2021. Another trend is that the center of eCommerce is shifting from the western hemisphere.

Even though Amazon is harder to squeeze into China’s e-commerce market. but it can take advantage of other Asian country’s e-commerce market. And other trends such as E-commerce personalization will be a standard, Mobile shopping revolution, Voice commerce is on the horizon are all opportunities to Amazon. Because Amazon has already