The company was founded in 1976 by Steve Jobs, Steve Wozniak and Ronald Wayne (Lu, 2012).  Apple is presently among the top five companies in America. Apart from the role in the computer world, it has also revolutionized the digital music revolution through its IPods.

This assignment will analyze the situational analysis, the company analysis, marketing environmental analysis and market competitiveness of the Apple Incorporation.

Apple was established in Cupertino, California as Apple Computer Inc.  In January 2007, the company dropped ‘computer’ and was then renamed as Apple (Imbimbo, 2009). This was due to the expansion from the original computer manufacture to other accessories.

The company aims to be the leading telecommunication company through offering innovative and well-designed products and be a global brand (Imbimbo, 2009).

The main competitors for Apple include Samsung, Microsoft and Google.

47% of those in this age group stated that they desire an I phone to be their next phone compared to 36% who preferred competitor products. In a survey done in 2015, it was found that over 55 million U.S homes had an apple product

Apple upholds labor laws in the formulation and eventual circulation of its products (Sutherland, 2012). It also has a software policy that protects it from being replicated without permission.

The consumers of Apple products are protected by consumer protection laws and regulations where they are given a one year warranty. Every activity function has a corresponding user term agreement. All Apple products are copyrighted as well trademarked.

Apple has got a large effect on many economies worldwide in form of creation of jobs. Apple products prices are fairly priced in comparison to competitors and are available at most stores (Sutherland, 2012).

Apple Company allows its consumers to shop as well as seek technical support through its website through and not limited to Mac books, tablets and pads at any time of the day (Sutherland, 2012). 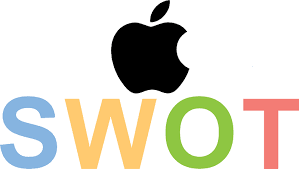 Some of the strengths that the company possesses include having a strong customer loyalty, strong brand image and awesome customer service (Apple Computer, Inc. SWOT Analysis, 2017).

Some of the weaknesses that Apple company experiences include a limited use of software that can be uploaded on its products. In 2011 it suffered a great loss when its founder, Steve Jobs died. Jobs was the brain behind most of the innovations at Apple.

The company also has had product and software recalls as well as update failures. It has also seen various lawsuits, failure of its products not working with different carriers as well as existence of counterfeits (Apple Computer, Inc. SWOT Analysis, 2017).

Some of the opportunities that Apple has introduced include retail stores, training session stores and an expansion of mobile device and media (Apple Computer, Inc. SWOT Analysis, 2017).

Its competitors are continuously improving their products frequently either for the better or to match up with Apple products.

The technology industry has also undergone a lot of changes and in the recent times, there has been a decrease in the demand for popular Apple products for instance the desktops and devices (Apple Computer, Inc. SWOT Analysis, 2017). Labor laws have also become very stringent.

In 2012, Apple Incorporation was stated to be the most valuable company globally (Arthur, 2014). This was coming after it had gone from the verge of bankruptcy.

This is credited to its founder Steve Jobs who was a genius creator and was able to change the future of technology through music, publishing and communication inventions.

Its products like the IPhone, IPad and IPod revolve around enabling a consumer experience and differentiation. The company is trying to sustain these strategies for the long haul.

It is also focusing on cost leadership so as to pre-empt potential losses just in case there is setback in innovation due to high level of competition in the technological arena.

The external environment provides opportunities and threats for any given company and comprehending it is very vital for the existence of a company.

In the technological field that Apple operates under, bargaining power of buyers is high since consumers can always shift to a competing device with little or no costs at all (Arthur, 2014).

Apple has been able to beat this due to product differentiation which makes it less susceptible to loss of sale due to fluctuations in price premiums. As a result, customer loyalty is created.

Bargaining power of suppliers also affects Apple’s strategy and how it relates with its suppliers. Some of the strategies that it has implemented has helped it limit the products costs when faced with progressively demanding patrons and economic turmoil.

Apple has not been able to eradicate the threat of new entrants into the trade despite its innovative and leadership status. It strategy towards it competitors varies based on the prevailing situation.

The first product that Apple made was the Macintosh.  The product was differentiated so as to compete with the likes of IBM, Dell and HP. It allowed consumers to plug and play.

The product was able to establish loyal customers who disregarded the price until IBM started selling its computer at lower prices. To beat this change, Apple turned to differentiation/ leadership strategy. In 1997, with Jobs at the helm, the company focused on differentiation rather than cost leadership.

Apple products were diversified and there was creation of scope through innovations. Apple expanded into a large market through emerging trends of technological innovation.

The company focused on a few products that they believed had the potential that it differentiated through innovations and product design so as to survive (Arthur, 2014). In 2007, IPod was introduced which allowed storage of up to 10000 songs in one device.

IPhone was later introduced which had an app store that offered more applications than its competitors. Through this, it became the largest corporation globally.

The App store was able to offer numerous applications than those of the competitor and Apple was able to use this to lock away competitors. The App allowed users to download applications straight into the phone. Later on IPads were developed which saw the benefits of Mac in a device that was less costly and portable.

Bookstore was then developed which saw its dominance in the publishing industry. It was able to compete with leading stores like Amazon.

The latest innovation from the company is the I cloud which allows Apple clients to synchronize all its products through a virtual network called cloud.

What next for Apple?

For the company to stay ahead of the pack, it has to use its core competencies as a differentiation and cost leader in this cost delicate world. It should apply fresh strategies to prevent any new entry to the market and slow down new rivals who are up to speed on innovations (Linzmayer, 2016).

It should ensure that it puts in place a long lived and sustainable strategy in a way that it is not outperformed by a competitor.

The company continues to face competition from Google and Microsoft in the software point of view whereas Samsung, LG, Sony and Blackberry already challenge the company in form of innovative brands (Linzmayer, 2016).

In spite of its record breaking sales performance and popularity, Apple has no widespread marketing strategy other than product and pricing strategies as well as publicities attained through media relations and tradeshows.

Apple works on a minimum budget as it never advertises its products through the print and broadcast media (Daniel, 2016).

For users of traditional media, they get exposed to advertising messages related to IPhone in different traditional mediums due the fact they are created and paid by network carriers.

Network carriers are keen to broadcast to existing customers when a new Apple product arrives (Daniel, 2016). These carriers do Apple a favor as when they are advertising their mobile or data services, they also market IPhone as well.

The carriers operate under stringent guidelines so that Apple maintains and protects its brand and promote uniformity. The unique nature of advertising and marketing especially of the IPhone shows the usefulness of the complete marketing strategy of Apple on top of its pricing strategies. The product is of high value due to Apple’s popularity

Apple has been a successful company and has been able to bring a big change in our day to day life. One of the pillars that has made it successful is its solid corporate culture which seeks to promote its values and beliefs among employees and shareholders in their commitment towards the company (Thompson, 2018).

The company enjoys brand loyalty and this is evident in how Apple’s customers sleep or wait outside its stores whenever they introduce a new product.

To attain this, the company, employs some strategies like employing well trained and well informed employees who have a good grasp of the products and services.

The company has also developed its presence in schools and universities which allow the young people to use Apple products (Scott, 2008).

Once the students get acquainted with these products, they will also want to use them at home or elsewhere. Apple employs extensive research to come up with fancy design.

This makes the product popular and customers become loyal. Other market competitiveness that the company enjoys include an accelerated growth in terms of electronic production and growth due to increase in foreign investment.

The company also enjoys massive support from other leading companies due to its niche in the market ts (Scott, 2008).

This makes it be able to a conducive environment for running its operations. The company also enjoys the fact that there is a rapid pace of innovation in electronic technology and its products are associated with this (Linzmayer, 2016).

Apple mainly enters markets through importing, exporting and licensing strategies in a given country (McLeese, 2012).

Licensing is preferred due to its positive features which are not found in other strategies like joint ventures. It also has a low risk and high returns. The import and export modes are also used as the other entry modes

From Apple we conclude that it has been an innovative company from the onset. It is a company that is the first one to release a product before anyone else does. Though risky, it has worked to Apples advantage.

This is an evidence that for a business to establish, risks have to be taken and they enable the company to identify the potentials and work on improving them.

For the success of any given company, there has to be a participation of consumers, shareholders and the employees a model that Apple has successfully implemented and it has been working fir them.

Arthur, C. (2014). Digital wars: Apple, Google, Microsoft and the battle for the Internet.