The following paper is a network security assignment help paper that is under area of computer science assignment.This is a sample paper that we provide at elite academic brokers.

The transmission of data or information between a source and a receiver is referred to as data communications.

The data is sent by the source and received by the receiver. The actual generation of information, as well as the resulting action of the information at the receiver, is not included in Data Communications (Bardis, 2017).

In today’s world of high-speed computers, dependable data communication is critical. In real-world communication systems, however, perfect data transmission does not exist. Errors, no matter how minor, will always be present.

Errors are caused by one of two factors. First, there may be a component malfunction, causing the data to be altered. The second, and by far the most common, type of error occurs when the communication channel picks up noise.

Communication lines are located outside of the computer and are subjected too much worse conditions than data paths found inside the computer (Bardis, 2017).

Errors don’t usually happen one by one. It’s more likely that they’ll happen in bursts. That is, if there is any noise on the communications line, more than one bit of the received data would most likely be incorrect. To make matters worse, errors do not occur in a predictable pattern over time.

Errors, as well as data, are transmitted between digital

communication systems. Data will be lost until these errors are identified and corrected. Data should be transferred with great precision for efficient communication (Panem et al, 2019). This can be accomplished by identifying and correcting errors first.

The most effective and simple to implement error detection mechanism is cyclic redundancy codes. CRC is based on binary division, while checksum is based on addition.

A series of redundant bits called cyclic redundancy check bits is appended to the end of the data unit in CRC. A second, set binary number divides the resultant data unit exactly.

The technique of generating the CRC bit is explained below:
If we can consider that there is an n bit message to be transmitted from source to destination, the sender device generates a k-bit sequence known as frame check sequence (FCS).

The k bits are attached to the n bits so that (n+k) bits are transmitted as a package. The k-bit frame check order is produced by splitting the n bit message, attached by k zeros, by a set number.

This number is (k + 1) bit segment, and it is considered as coefficient of a generator polynomial. The r-bit Frame check sequence is produced as the balance of binary division. Once the (k + r) bit frame is acknowledged, it is divided by similar set number.

If the remainder part is zero, it indicates that there was no error, and the frame is accepted by the receiver. CRC is a powerful tool for identifying errors in data that is commonly used in data transmissions, data storage space, and data compression. It’s also used for detecting logical faults and checking integrated circuits.

This code not only detects but also corrects the error bit in the entire data sequence. This code employs a variety of parity bits at strategic locations in the code word. The number of parity bits is calculated by the number of data bits. The hamming code makes use of the relationship between redundancy bits and data bits, and it can be used for any number of data bits. The redundancy bits in Hamming code are put at specific calculated locations to avoid errors. The Hamming gap is the distance between the two redundancy bits.
Digital modulation techniques and encoding schemes.

ASK is a type of amplitude modulation in which bit values are assigned to non-continues amplitude levels. To transmit information, the carrier signal is modulated among the members of a set of discrete values.

FSK is a type of frequency modulation in which bit values are assigned to distinct frequency levels. There are two types of FSK: noncoherent and coherent. The gradual frequency shifts between two distinct values known as the “mark” and “room” frequencies in noncoherent forms of FSK. There is no phase break in the output signal of coherent FSK. FSK modulation formats produce modulated waveforms that are purely real values, so they don’t have the same characteristics as quadrature modulation schemes.

PSK is a form of angle modulation used in digital transmissions, in which the carrier’s phase is independently varied to represent data, either in relation to a reference phase or the phase of the signal unit immediately preceding it. Some PSK systems have only two possible carrier phase angles; each phase shift carries one bit of data, so the bit rate is equal to the modulation rate.

Until information can be transmitted through communication channels, it must first be encoded into signals. The waveform pattern of voltage or current used to represent the 1s and 0s of a digital signal on a transmission connection is known as digital to digital line encoding.

Three voltage levels are used in bipolar. Positive, negative, and zero are the three options. Bit 0 happens when the amplitude is zero. Bit 1 is also known as Alternate Mark Inversion because it happens alternately when the voltage mark is either positive or negative (AMI). Since the pulses for Is are polarized differently, there is no DC part.

Data is expressed by changes rather than levels in this encoding scheme. Rather than stage, it is a more accurate and error-free method of change detection. It’s easy to lose track of polarity in complicated transmission layouts.
The TCP/IP model suite
The TCP/IP model, is a group of communication protocols that are used to link network nodes on the internet. In a local area network, TCP/IP can also be used as a networking protocol (an intranet or an extranet).

Davidson (2012) affirms that TCP/IP defines how data is shared over the internet by defining
End-to-end communications that define how packets should be broken down, handled, distributed, routed, and received at their destination.

TCP/IP is designed to make networks stable, with the ability to recover automatically from the failure of any computer on the network, and it needs little central management. The TCP/IP suites comprise of two main protocols; TCP and IP.
TCP specifies how applications can establish communication pathways through a network.

It also controls how a message is broken down into data packets and sent over the internet, where it is reconstructed in the correct order at the destination address. This IP address is checked by each gateway device on the network to decide where the message should be forwarded.

The Network Interface layer is in control of sending and receiving TCP/IP packets on the device medium. TCP/IP was designed to be system-agnostic in terms of system access, casing organization, and medium.

This layer consist of protocols such as ARP, IP and RARP
ARP – Address resolution protocol. This protocol binds an ever-changing IP address to a media access control address also known as physical address of the machine.

This layer’s primary function is to transfer packets from any network or device to their destination, regardless of the path they take.

With the support of different networks, the Internet layer provides a practical and procedural mechanism for transmitting variable length data sequences from one node to another.

The major protocol in this layer is IP, ICMP, IGMP and ARP.
IP protocol is concerned with routing the packets from source to destination on the internet layer of TCP/IP model.
ICMP – Internet control message protocol. The Internet Control Message Protocol is responsible of providing symptomatic capabilities and reporting errors caused by failed IP parcel delivery.
IGMP – The Internet Group Management Protocol (IGMP) is in charge of managing IP multicast groups.

The Transport layer is in charge of providing session and datagram information to the Application layer. TCP and UDP are the two most important protocols in this layer.
TCP- Transmission Control Protocol is an internet protocol suite that decomposes messages into smaller data packets and reassembles them on the receiving end. It is a secure, one-to-one, connection-oriented communications service.
UDP – User datagram protocol is a connectionless and unreliable communication service that facilitates exchange of both broadcast and multicast type of data transmission. 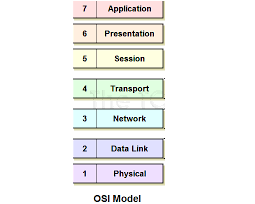 The application layer is the fourth and final layer in the four-layer TCP/IP model. The Transport layer is mounted on top of the Application layer. The Application layer switches between layers and defines the protocols that applications use to exchange data. The protocols in this layer include HTTP, FTP, SMTP, and Telnet
HTTP – The Hypertext Transfer protocol is concerned with the exchange of web documents over the internet in World Wide Web system.
FTP – the File Transfer protocol is used to transfer file in a computer network. It’s a widely used standard protocol for sending files from one computer to another.
SMTP – the Simple Mail Transfer protocol is used to send and receive messages over the e-mail system.
Telnet – this protocol that allow remote communication between computers over the network.

An IP address is a number that tells you how to get to a particular host, usually outside the LAN. An IP address is a 32 bit number having an address space of 232. IP addresses are binary numbers, so they’re usually written in decimal (IPv4) or hexadecimal (IPv6) thus making them easier to read and use for humans (Garcia-Jimenez et al, 2009).

Since IP is a connection less, data gram-oriented protocol, each data packet must include the source IP address, destination IP address, and other information in the header to be transmitted successfully. IPv4 and IPv6 are the two variants of IP currently in use.

On the internet and in several business networks, the original IPv4 protocol is still in use today. The IPv4 protocol, on the other hand, only allowable for 232 addresses. This, combined with the way addresses were assigned, resulted in a situation where there would be insufficient unique addresses for all internet-connected devices (Sisat et al, 2012).

The Internet Engineering Task Force (IETF) created IPv6 and formalized it in 1998. This update significantly expanded the address space available, allowing for a total of 2128 addresses.
Notably, an IP address is typically represented as four octets of numbers ranging from 0-255 in decimal form rather than binary form.

There are two pieces of IPv4 addresses. The network is specified by the first numbers in the address, while the host is specified by the last numbers. A subnet mask defines which part of an address is used for networking and which part is used to address a particular host. IP version 4 is grouped into five classes; A, B, C, D, and E.

There are 128 different Class A networks to choose from. However the address 127.0.0.0 is referred to as loopback address.